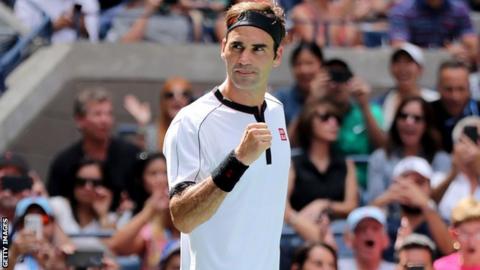 The Swiss five-time champion fell a break down early in the first set but then won six games in a row to establish control in the fourth-round match.

Federer, 38, hit 34 winners while Belgian Goffin could only manage eight.

He will face Bulgarian Grigor Dimitrov in the last eight.

Federer said of his win: “It was great. David didn’t have his best day either, he was struggling.

I was down on the score early so had to come back mentally.

“But then when I was up a break I started to feel like he wasn’t playing the same way and I was very happy with my level of play.”

The third seed had dropped the first sets in both of his opening two matches, but played with a swagger when he beat British number two Dan Evans in 80 minutes in the last round.

That form continued against Goffin, with the Belgian winning less than half Federer’s total of 83 with 39.

Federer booked his place in the quarter-finals for the 13th time in New York with a stunning passing shot down the line. The prospect of a semi-final against world number one and defending champion Novak Djokovic is no more after the Serb quit his match against Swiss 23rd seed Stan Wawrinka.

Should Federer make it to the final, he could come up against Spanish second seed Rafael Nadal for the first time at the US Open.

Ashes 2019: Ben Stokes performs the impossible to give cricket another golden chance